Attorney Christelle C. Beck is the founder and managing partner of Frost & Beck, P.C. She has had a long and successful legal career in family law helping numerous individuals navigate complex matters such as divorce and child support.

Attorney Beck graduated from California Western School of Law in 1990. Shortly after, she became a prosecutor for the city of San Diego. She moved to Colorado in 1993, setting up a successful private family law practice in Boulder, Colorado.

In 2002, she temporarily relocated to London, England where she received a Master’s in Diplomatic Studies with Distinction from the University of Westminster. She then served as a Legal Officer in the Department of Civil Administration for the United Nations in Kosovo.

Attorney Beck has used her international experience to teach International Law as an adjunct professor with the University of Denver Sturm School of Law. She is licensed to practice in both California and Colorado in the United States and is on the Roll of Solicitors in the nations of England and Wales.

In her free time, Attorney Beck enjoys traveling, her dog and cat, spending time with her two adult daughters and reading. 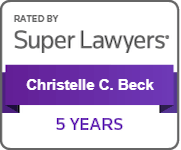 Attorney Beck has held leadership positions in the following organizations: